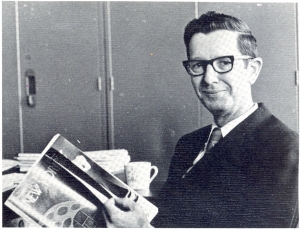 This year’s dedication is for founder of the magazine, Dan Richard, the one responsible for the birth of this publication and contest in 1980.

Each year, members of the Crowder Quill staff choose a recipient for dedication of the annual publication. The honor is given to someone who has made a significant contribution to the publication in some way.

The posthumous dedication of the Crowder Quill for Dan Richard, founder of the magazine, is long overdue. Retirements of key individuals and timely events unfortunately took precedence over honoring the one man who is responsible for the birth of this publication and contest.

“When Dan Richard stood in front of a handful of students, he had a vision, a formless entity he wanted to bring to life,” said Sandy Jordan, original staff of the Quill.

Another founding Quill staff member, J.P. Dickey, recalled that the first magazine was a special project as part of the creative writing class that Dan Richard taught that spring 1980 semester. Thereafter, it became a publications class, which still carries on today as the Magazine Production Class.

Dickey’s recollections of his instructor were of “a great teacher, open to ideas, patient, fair” and a model for how to respectfully offer criticism to students. Richard taught English courses from August 1967 to May 1988.

In a letter written to the Quill staff upon the 20th anniversary of the magazine, Dan Richard
said: “I am delighted to hear that the Quill is still providing a marvelous service for the people of Crowder and the surrounding community. I feel that working with the staff and contributors was the high point of the my tenure at Crowder College.”

The posthumous award will be accepted in his honor by his daughter Lesli Neuenschwander, editor of the Quill in 1982, pictured second from the left, below.

With great fondness, Richard’s daughter Lesli Neunschwander recalled serving as editor on the Quill staff in 1982. Much later, her children entered and won Quill awards. She remembers her father as inspiring and smart. “He wanted to get people thinking, to be clever and spontaneous. This is why I think he started the Quill; to get all those creative juices flowing, and to give them an outlet.”

It is Richard’s legacy that now lives 37 years later, carrying on the tradition of encouraging and  showcasing the literary and artistic talents of area authors, artists, and photographers.